One of the things I find that I am particularly bad at is taking pictures of projects while I'm making them. This can be kind of a bummer for this blog as I would like to share more of what happens on some of my projects rather than just the finished outcome. One of the times I wish I had captured more of the process is when I was making this rebate plane. I have since moved my camera and tripod down to the shop to keep it closer at hand while making stuff, cold comfort on this post though. Anyway I have plans to make another 5/8" rebate in the near future so hopefully I'll have my wits about me to document that a little better. 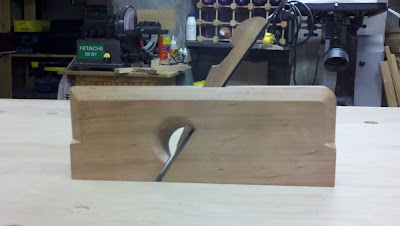 So here's a pic. The plane is made of quarter sawn cherry that I had around for a bit an that my grandfather had even longer. I made the quarter sawn billet out of a 4 in thick block of plain sawn cherry by re-sawing with the band saw. The wedge is made from a piece of QS cherry I had left over and the iron is a tapered rebate plane iron that I purchased from Lie-Nielsen. I made this plane with a york pitch (50degree) and made a conical escapement that ejects to the left, or off the bench for right handed users. 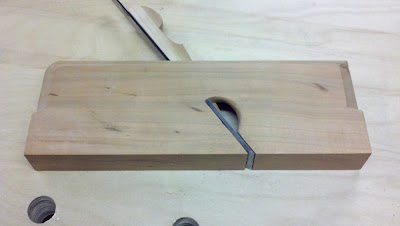 Above is a pic of the other side of the plane and the sole, its a square rebate, as I needed one for making molding. I decided to make the plane as opposed to buying one as good used square rebates are hard to find and new wood ones are pricey or metric sizes like those from ECE. Anyway it was fun to make.

I started with the plane making video from Larry Williams of Old Street Tool. While it doesn't cover this type of plane exactly (it focuses on a side escapement hollow and round set) it does provide valuable information on tools, wood selection, techniques and fitting. I recommend it highly. Next I purchased the iron and a couple of floats.

I was kind of confused as to which floats I would need the most to make a plane so I emailed Larry Williams and asked what he felt where the floats that were absolutely necessary to make the plane. In his gracious reply he recommended 3, the 1/8" and 3/16" edge floats and the push side float. He even said you could get away without the 3/16" edge but it makes some things easier. I would agree that the 3/16 is handy, especially when it comes to fitting the wedge.

I squared up the billet and from here I pretty much followed the video for laying out the plane, making modifications as necessary to make a rebate plane instead of a side escapement.
I kind of made up the conical escapement on my plane after looking at dozens of pictures of rebate planes on the web. Escapements on rebate planes vary wildly and I guess they all work but I find the left conical escapement that I chose works pretty well and doesn't tend to clog with shavings too often.

Sinking the wedge mortise was probably the most difficult part. The plane you see is my second attempt, the first died here after my drilling for the mortise went askew. I didn't have the bit for my brace recommended by Larry in the video so I used a hand drill and twist bit. This worked ok  but my hand drill at that time was a bit played out and wasn't smooth. I've since replaced it with a much smoother double pinion so I think my 5/8" inch plane should be a little easier. Even though I made two I think it was better than making a complex jig to hold the billet at the proper angle on the drill press. 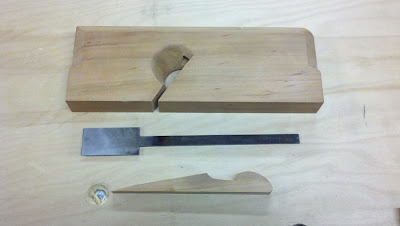 After the mouth is sawn open and the wedge mortise is started with the drill it is mostly a matter of removing wood to your layout lines with the floats and then following the iron and wedge fitting methods shown in the video. I'm not going to recap the whole video here but some other things that I did were copy the wedge design from one of my other planes and added the deep chamfers which are very comfortable. After hardening and sharpening the iron and adjusting the mouth the plane works very well. I'm definitely looking forward to making the next one.
Posted by Regis Will