I've taken some photos and want to share with all of you my great grandfathers plane. At least I figure it is his since I acquired it from my grandfather and I know it is too old for him to have purchased it directly. 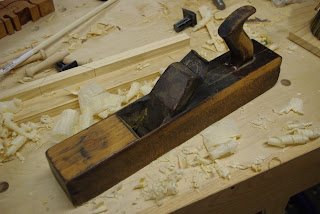 This plane was purchased from Joseph Lautner and Co. Hardware in Allegheny, PA, somewhere between 1878 and when it closed in 1913. Allegheny, PA, for most of that time was a separate city across the Allegheny River from Pittsburgh and is now Pittsburgh's North Side. Joseph Lautner and Co. sold planes under their name, their imprint is on the toe of this plane, but the planes were made by either the Ohio Tool Co., or Sandusky Tool Co.

I don't use this plane and have no plans to restore it to use, but I am glad to have it. It gives me a nice connection to past craftsmen in my family and helps me feel that I'm carrying that on into the future. 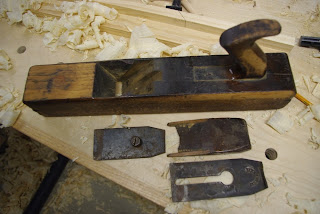 From this photo you can see that this plane was well used. The tote and front of the stock are quite worn from handling, and the iron has been sharpened all the way down to where the slot for the chip breaker begins, theres only about 1/8th left. You can see from the chip breaker that it must have had about two inches of usable iron. That's a lot of sharpening and a lot of wood planed. The mouth has also gotten quite large from seasonal adjustments.

The poor plane is in pretty rough shape, someone was partial to using a steel hammer to adjust it and is has marks on the toe, heel and wedge. One of the wedge abutments is cracked a little and the iron is also fairly mushroomed. I suspect this might have been my grandfather. I found this plane in the till of his workbench after he passed. 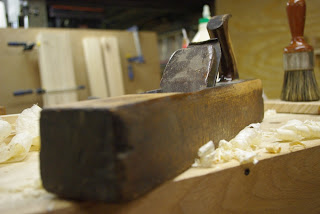 Hopefully you enjoyed seeing this plane and that it also reminds you that we as woodworkers are carrying on knowledge and tradition that has been useful for many centuries and will be so for many centuries more.
Posted by Regis Will