Intro, Part 4
This is a pretty short segment on the workshop reorganization that I've been doing. I'm pretty happy with things so far and this post is going to show what might be the most important piece I could have added to my workshop... a wall. Yes, my workshop has other walls, but they are stone and I don't like to hang things on them due to their crumbly nature and the slight efflorescence on the surface. So now I have a wall, and its helping me get much more organized. 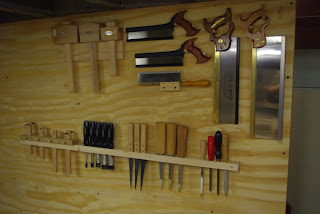 Wall Construction
This is just a simple stud wall that I placed along side the staircase coming down to the basement. It was really the only place for it and it has the added benefit of keeping sawdust off the stairs. It's a simple stud wall, 24" on center, as tall as possible and about 7 ft long. I faced it in 5/8" BC plywood attached to the studs with screws, nothing fancy.

On Wall Storage
The ability to hang tools on the wall was pretty much the prime reason that I built it. I can see the top of the workbench now and that is wonderful. I've hung the saws on 3/8" dowel pegs that are set in holes bored directly in the plywood. The gents saw received a little bracket to sit in and the mallets just sit on a ledge and they stay pretty well. The chisel holder is 4 ft long and is divided into three sections by the little blocks that support the thin front plate and provide a place to attach it to the wall with screws. It' also holds my marking gauges pretty well.

Final Additions
In addition to adding more tools to the wall I'm also adding a small bench, about 48" x 15", that I'm constructing out of laminated 2x4s. It's going to attach to the wall in the back and have two legs out front. I plan on having my mechanics vise on the bench as well as having it be my main sharpening area.  I'll post some pics of this arrangement as soon as its finished.
Posted by Regis Will