This workbench post will probably be somewhat of a rehash of a workbench post I had on my now defunct  blog "Old School Tool". I'm reusing the photos from that post in this one since they cover some of the earlier stages of the bench. In this part I'll mostly be discussing some of the motivations to build the bench, why I built it the way I did. In Part 2 we'll take a look at what I like and don't like about it now that I've used it for 2 years and what I might do differently next time.

Pretty much I had decided that I wanted to work more with hand tools and to do so I really needed a proper bench. Up until this time I had been using my table saw as my primary work space which was less than ideal. So I got a copy of "The Workbench Book", researched on the internet, looked at benches at Rockler and Woodcraft, and looked in magazines. I pretty much decided to build my own bench, it had to be heavy, and that due to budget at the time I would make my own vises and that it would be built from readily available materials. 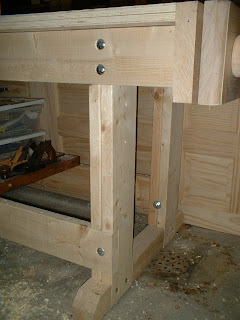 So here is a shot of the frame of my bench. To cut down on costs I created this part out of 2x construction lumber. The uprights are double laminated 2x6 notched at the top for the 2x6 cross pieces that hold the top. There are 2 of these on top of each leg. At the bottom on each side there is a 2x6 stretcher and the feet at the bottom are double laminated 2x4. Everything is held together with the carriage bolts you see in the photo. I got the idea for this construction method from the internet when I built a lathe stand earlier in the year. It makes a sturdy, heavy base and uses no complex joinery.

Also in this photo you can see the edge of the top which i constructed from 2 layers of voidless birch plywood. Actually it is three pieces, the top is one piece and along each side there is a second piece of plywood about 10 in wide leaving a gap in the center of the bottom layer. I added this second layer to obtain additional thickness for bench dogs and to bolt the top to the frame. I left the gap so I could get the whole top out of one 4x8 sheet. 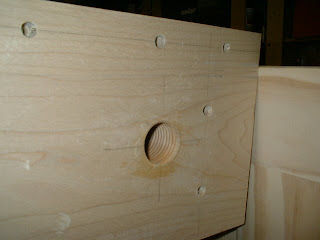 Here is a shot of the mounted side of the end vise. I splurged and used 8/4 rock maple for all of the vise components. The end vise is twin screw using 1-1/2" rock maple screws. You can see the tapped hole in the photo. The vise is mounted to the plywood top along the top edge with screws and to the 2x6 beneath on each side. 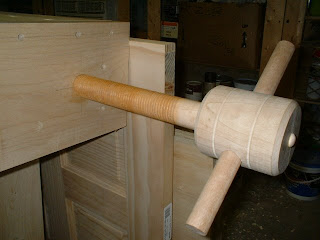 Here's a shot of the screw without the jaw. I left the screws long on this vise so I have a clamping capacity on the end of about 10 inches if I have the patience to unscrew it that far. I cut these screws with a screw box and tap set I got at Highland Woodworking. It was the largest one I could find at the time which is why I chose the 1-1/2 size screws. 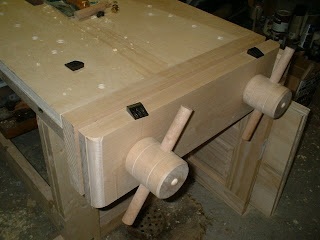 Here is the end vise showing what it looks like with the jaw on. To prevent binding I made one of the holes in the jaw slightly oblong to allow some play. 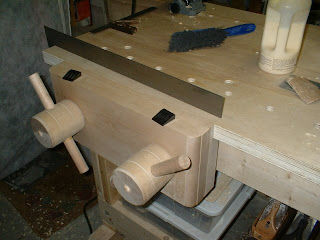 This is the face vise. It is of similar construction and the end vise just smaller. The mounted side of the vise is now flush with the skirts on the top. This one opens about 6 inches. I had to cut some holes through the 2x6 behind the vise to accommodate the screws. 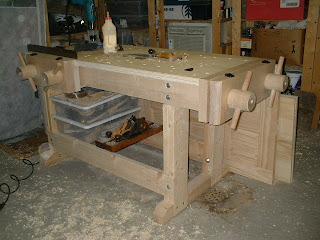 Here's a look at the over all bench at a usable level of completion.

Hope you enjoyed this overview of the construction and some of my motivations. We'll discuss the bench in use during part 2 along with some things I've added since this photo was taken.
Posted by Regis Will